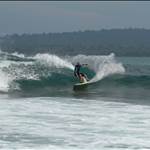 Hi guys I tried the Axis 370 stab today after my mate got one and he said he was struggling with it. I assumed it was just to much of a change as he was coming off the 500 stab. I have been loving the 1000HA wing and 440 stab combo for sup foiling in waves up to head and half high. It pumps so well and the turns the are nice and tight if you want them to be. The drive, acceleration and flow the 440 give is just insane.

So that's the background info. Today I tried his 370 in pumping head high plus long waves at my local again with the 1000HA wing.
Everything was set up the (mast in very front of the tracks like I always have and front foot strap in same position) the same.

Straight away on a wave using the 370 I noticed quicker acceleration but also quicker deceleration. Yes you can turn sharper but at the expense of drive, glide and over all speed. Also it was noticeably less stable so your constantly adjusting your ride height compared to the 440 stab where you can just get in top gear and the foil just locks in and takes off.

Lastly I found pumping far less rewarding. With the 440 you just dip the nose of the board and step on the stab and the board rockets forward and I can pump as far as my heart, lungs and legs will go. With the 370 I could not get any forward drive from the stab so pumping was limited.

What am I missing, it seems everyone says go a smaller stab its way faster and better at pumping.
Any constructive input would be appreciated.
Cheers Bender

You are not wrong. Lots of opinions out there. Body weight changes things a little too.

For me, a tiny tail is less physical to pump (less tail area fighting you) but then there is less (auto) speed between pumps, when trying to cruise or catch your breath.

Demo the 390. I prefer it with the 1000. It's nothing like the other tails. Different AOA they said.

No right or wrong answer. Sport is too new for that.

Ended up getting the 390 after reading some reviews with the HA wings.

You have read up to here.
Please note! This site is in active development, and is a "Stand Up Paddle Only" view-only portal of Seabreeze.

Visit seabreeze.com.au for the full experience. :-)
About supmad.com.au
supmad.com.au showcases the latest & freshest Stand Up Paddle content in Australia.

Working with Seabreeze.com.au, we filter Seabreeze to show the newest Stand Up Paddle articles, classifieds, photos, news, events and more...

Stand Up Paddle Forecasts & Live Wind Reports
About Seabreeze.com.au
Australia's #1 Watersports website, serving people like you & I since '97!