I just got a 9 x 26 x 93 liter infinity new deal. I'm a lightweight at 65kg and this is one of the few production boards which I felt would work for what I want to do. Overall the board was super fun and it really brought out the best in the surf I had on offer today, shoulder to head high, moderate chop and some sideon wind.

I've been using my 7'6 sup almost exclusively for past year but wanted something for small days, sloppier conditions and when the shortboard is too slow.

Shape: It's pretty high performance, I measured (probably inaccurate) at 5.5'' nose scoop and 3.5'' inches tail. Nose was around 18'' one foot off and tail 15.8'' or so. The rails are thinned out, it looks pretty close to a surfboard really. I weighed mine at 14.2 lbs with fins.

Stability: Well there is no getting around a 26'' inch board but taking that into consideration I thought it was pretty stable even on a bumpy day but it might not be enough if you aren't used to smaller boards.

Paddling: Not as fast as I was hoping but it maintains speed between strokes so you can cruise around with a fairly relaxed cadence. It tracks just ok, but it does have the us box so I could put a single fin all the way back if I want to flat water paddle.

Wave catching: Good but you have to watch the length on a steep late drop and I just avoided those for now. The glide was nice on takeoff and I could wait for the wave to steepen without worrying about taking extra stroke or falling out the back.

Wave riding: Wow, so fast especially considering the healthy rocker and the ton of grip and turning available. I have an 8'5 speed and to be fair the board is too big for me and shorter, but this board is way faster. I can see why it was used it in that slab video, tons of drive down the line. Turning was super loose and easy, I didn't have to be all the way back on the board or worry about the rails catching or resisting from over turning something I have struggled with before on surf longboards. Moving up the nose is possible if you pick your spots to avoid sinking. Very impressive combination of speed, grip and turning.

It comes with high quality fins and pads which worked well.

Price: If you have to ask.... but probably ballpark to other boards in similar construction 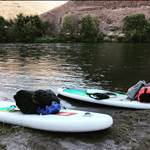 Congrats on the new board and great review! 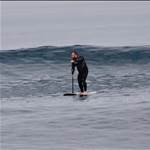 I talked to someone who had one and used it as an all arounder, said it was great even in bigger surf. I think he was around 80kg. I wouldn't want to go shorter on mine without losing the more specific longboarding feel.

SLS did you put rail tape on New Deal? Just got BlurrV2 wasn't sure if I should tape, just put e-tape on paddle recently.

You have read up to here.
Please note! This site is in active development, and is a "Stand Up Paddle Only" view-only portal of Seabreeze.

Visit seabreeze.com.au for the full experience. :-)
About supmad.com.au
supmad.com.au showcases the latest & freshest Stand Up Paddle content in Australia.

Working with Seabreeze.com.au, we filter Seabreeze to show the newest Stand Up Paddle articles, classifieds, photos, news, events and more...

Stand Up Paddle Forecasts & Live Wind Reports
About Seabreeze.com.au
Australia's #1 Watersports website, serving people like you & I since '97!